The few times I've had the opportunity to see Mt Fuji from afar I have always enjoyed the wonderful view it offered. I'd thought for a while that I'd like to try climbing it, and while on Amami with my Japanese friends a few of us discussed the possibility of climbing it. Unfortunately the window for climbing the volcano is quite small - only in the middle of summer - and we didn't have many weekends left in which to do it. This meant that it was only to be Toshi, Kazumi and myself climbing it.

Reading a few reports before embarking on the journey I was filled with a mixture of excitement and dread. It was going to be an epic climb, but surely well worth it. The day we had planned arrived and the weather was looking sketchy, but we decided to head out there to give it a go and if the weather proved foul at it's base we would turn back for Tokyo.

As it happened the weather was looking pretty good when we arrived. There were only a few scatterings of cloud around and we were able to see stars and the moon - a good beginning to the trek.

After taking a bus to the starting point for the main climbing route we started what would be the most intense and lengthy climb of my life (so far). Our journey began at 10pm and we weren't expecting to get any sleep until we were back down the mountain the next day. 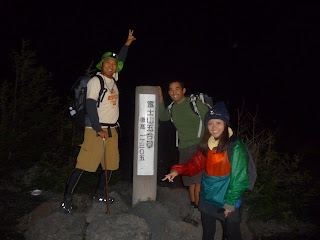 We arrived at the first station fairly quickly, which gave us the confidence that this wasn't going to be so bad after all. Things soon became more challenging as the trail became steeper and steeper the closer we got to the top, however.

By the wee hours of the morning our legs were jelly and we were quite tired, but nevertheless still very keen to reach the top before sunrise. We would stop often, the thin air causing us to get out of breath a little faster than usual. 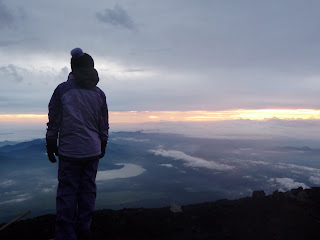 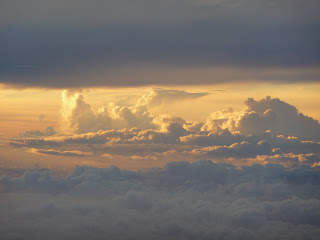 At around 4:30am we realised we weren't quite going to make it to the top in time, so we stopped a little bit short of it to watch the sunrise. The clouds were wonderful - it was such a great view - but the sun was hidden behind them. We didn't get a direct hit of sunlight until we were almost to the top. 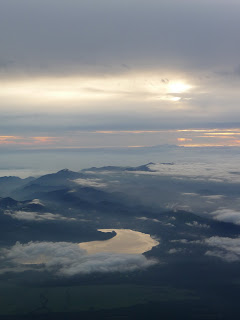 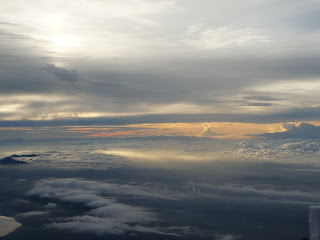 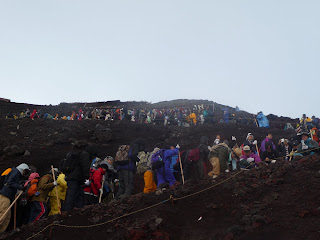 The trail was quite congested for the last little part of the climb, with so many people stopping to see the sunrise before resuming the climb to the top of the peak. After a short while of climbing we turned around to be greeted by the most ridiculous view you could possibly imagine... 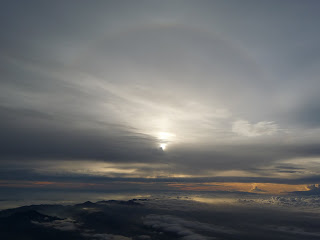 Absolutely incredible. It was a very happy and emotional moment for me - after climbing for so long, being completely exhausted, sore and ready to sleep, we were rewarded with this magnificent view. I simply could not believe it. Strangely enough the majority of climbers didn't seem anywhere near as taken by it as I was. The fools!

We finally reached the top, pausing by the Torii for a quick victory shoot :) 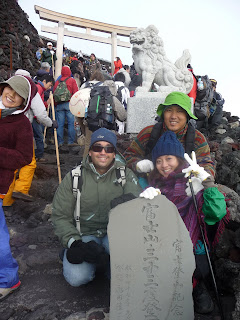 The top is host to a shrine and a small restaurant / rest area. We did a quick prayer at the shrine and sat down to order a hot miso soup and rest our weary limbs for a while. 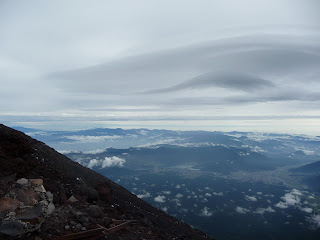 It was too cloudy to see the crater at all when we first got up there, but just before we left it cleared enough to get a view of it. 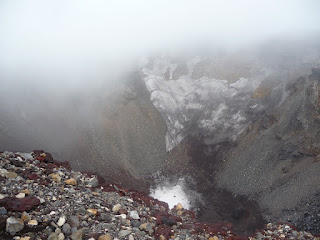 After some time at the top we began making our slow way down the hill. The journey down seemed to stretch on forever. The trail was subtly different to the way up, so we kept on getting false victories, thinking we were further down the mountain then we really were.

Finally, battered and exhausted but extremely satisfied and happy, we reached the beginning of the hike again at about two in the afternoon. The line for the bus was huge, so we had to wait for over an hour before we could get back down to where the car was parked. 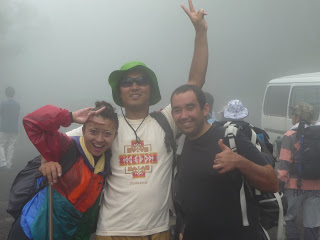 When we eventually made it back down after 16 hours of hiking we headed straight for a restaurant for the specialty dish of the area, Houtou, a thick Udon-esque noodle served in a soup with mountain vegetables. Of course, we had to include a beer to celebrate the auspicious occasion. 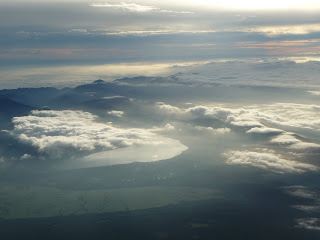 There's a saying in Japanese that translates to something like "You'd be a fool not to climb Fuji once in your life, and you'd be a fool to climb it more than once". I have to say that I completely agree with that after my experience on Fuji. I will never forget it, but it's unlikely I will ever do it again. But who knows, my arm could be twisted ;)