Since I went to Turkey for a total solar eclipse in 2006, I have known that there would be a festival somewhere in Japan for the eclipse of 2009. Surprised as we were to find out that planning had started three years ago, Japan was on the list of places to be in the next few years. This eclipse was part of the reason I chose this year to live in Japan, so there was a lot of excitement built up around it.

I was travelling with Alexander, who was saying farewell to friends and Tokyo not a day before we left for Kagoshima, our stopover on the way to Amami o Shima, an island in the south west of Japan. We had flights booked to Kagoshima, arriving in time to stay the night and catch a ferry to Amami the following evening. 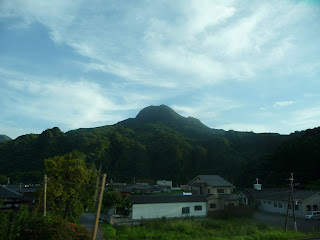 Our night in Kagoshima was an interesting one. Venturing out in search of food, we found ourselves in a surprisingly expensive restaurant serving local cuisine. They're big on their sweet poatoes down that way and I must admit, the sweet potato tempura we had was amazing. The food in general was delicious, but we ordered a dish called 'kani miso' (crab miso) thinking it was a miso soup with crab in it. The lady said nothing as we ordered but soon returned with a small dish of a greyish puree - the kani miso. It turns out this is a delicacy, but rather than being a miso soup as we had hoped, it is actually the intestines and their contents from the crab, blended up into a paste and eaten while drinking sake. Shocked as we were, we decided we might as well give it a go and ordered some sake to go with it.

The taste was less than enthralling. The best description I can give it would be that it tastes like seawater with a vague overtone of crab that has been sitting out of the refrigerator for a little while. It wasn't vomit worthy, but it certainly wasn't delicious. Wanting to make sure we tried it properly we had a few more goes, drinking sake all the while, but eventually abandoned any further attempts at cross-cultural exploration via crab innards. 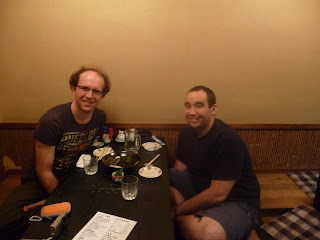 Alexander had suggested earlier that we go back to visit this small shop / street bar we had seen while searching for a restaurant. I was keen, if a little intimidated, so we returned to the place and sat down. The patrons were of course all Japanese, all middle aged (except for a younger girl who came later on, the owners' daughter from memory) and all very curious about us. We spoke to them a fair bit, but after I had exhausted my basic conversational knowledge I was spoken to less. I struggled to follow the conversation but often it was a bit much for me.

It was fun, though. We drank shouchu, ate the delicious sashimi presented to us and had a generally jovial time. One lady was trying to get one of us to marry her daughter, all the while telling us how ugly she was. Eventually her daughter came to take her mother home (she wasn't ugly either) and we were free of her attempts at enforced matrimony.

The following day we stocked up on last minute supplies for the festival and went to our ferry in the late afternoon. We met a number of people on the ferry who were all heading to the festival, and before long the various groups eventually joined in one big pre-festival party on the ferry.

The first photo below is Sakura-jima, a volcanic island next to Kagoshima. The following two are from the ferry. 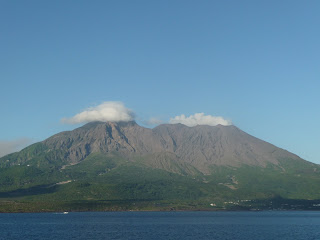 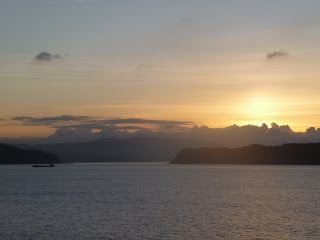 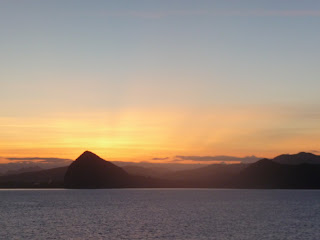 At 5am the next morning we arrived at Naze, a port town on Amami island. We had to wait a few hours before the first buses started, but eventually we found ourselves on one and heading for the festival location. After arriving it became apparent that we were not allowed in until the next day - only staff and volunteers were. As luck would have it, a lovely Japanese guy was telling us about his camping spot down the road, and after dropping his friends and gear off he drove all the way back (10-15 minute drive) to pick us up (there were four of us), stuff us into his tiny car and give us a lift down to the beautiful Tomori Beach. 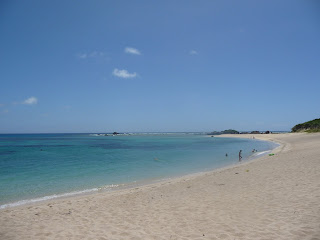 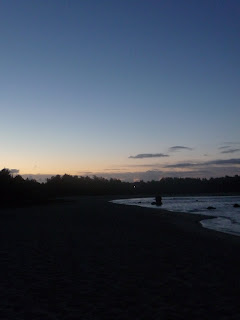 The place was amazing. The locals told us it is the most beautiful beach on the whole island. We set up shop here for the day and tried our best to avoid getting too sunburnt. The other three all ended up terribly burnt, but I managed to escape with just my legs going a bit red. We snorkelled the day away and just took it all in - the snorkelling was amazing, so many beautiful fish and we heard there were even turtles around, though I never saw any (sadly). I did see a few sea snakes though.

In the late afternoon, I was lying on my towel in the shade and heard what I thought to be a familiar Japanese voice. Seconds later, I hear 'Dowaito!' and turned to see my friends Toshi and Kazumi strolling down the beach. I knew they were coming to Amami of course, but it was such a surprise to randomly run into them! We all went for a snorkel and hung out for the evening, drinking beer, chatting and generally having a jolly old time.

Toshi offered to give us a lift to the party the next day, so after eating breakfast, having a few morning swims and packing our gear we piled into his hire car and headed for the festival. They weren't able to get camping tickets for the festival and decided to camp there at Tomori, along with other friends from Tokyo and Nagoya who had not yet arrived.

Arriving at the festival location, the day was already amazingly hot and humid. Our packs and baggage felt like they weighed tonnes and the heat sapped every bit of energy we had. We were warned about the dangerous waters (turns out they weren't that dangerous) and the poisonous, deadly snakes that we were to be sharing our campground with. I never saw one, but many (including Alexander) did, so they were most certainly present. If untreated after a bite you die within thirty minutes. Certainly a worry, but not that much different from bushwalking in Australia. We were cautious nonetheless.

After setting up camp and running into one of Mimu's friends from Tokyo (who I had met before), we made our way down to the beach to have a dip and search for a shady place to relax. There were several camping areas in various places to either side of the gravel road winding it's way down the hill. Halfway down was the food and bar area, which was looking somewhat bare on the first day. Further down the hill was the main stage area, partly-constructed, along with the info tent, crew area and Habu-infested camping space. A short walk further lay another beautiful beach... 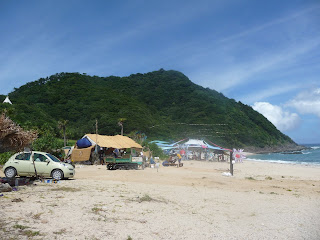 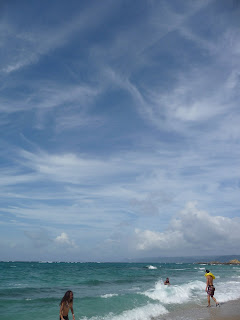 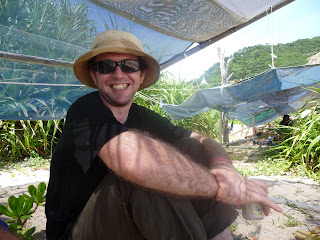 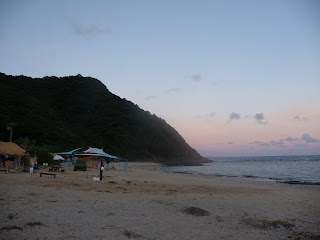 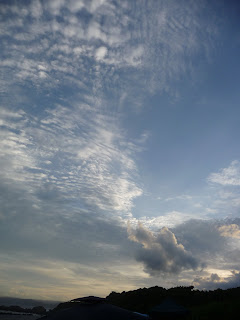 To the left, a beach bar and the beach stage, and to the right, a low shade structure running along the beach. This shady area quickly turned into the place where we would spend our days. I would arise at 6:30 or so when the sun hitting my tent turned it into an uncomfortable sauna and wander down to the beach to set up my mat. A morning swim to start the day, and then into the routine that would be repeated many times throughout the course of the festival - alternating between swimming, snorkelling, eating, napping, reading, chatting and drinking a cold beer. It was a hard life, and also in my opinion the best way to 'enjoy' the ridiculous humidity - there wasn't a lot of energy for doing much else. 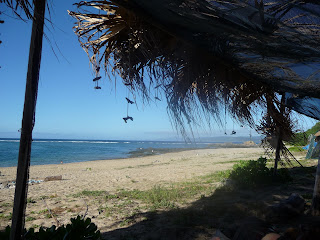 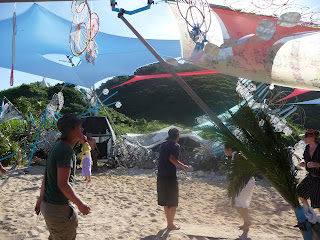 The beach stage would kick off in the late afternoons, run through the evening and finish around 9 or 10 in the morning. The music varied, but overall the music at the festival was a bit clubby and often strange. Lucky we were in this tropical island paradise, surrounded by friendly people and eagerly awaiting the oncoming eclipse ;)

I had forgotten that my friend Brian was coming too, and received a pleasant surprise when I saw him strolling up to the shade structure one afternoon. We had a great chat and spent a bit of time hanging out over the course of the festival. 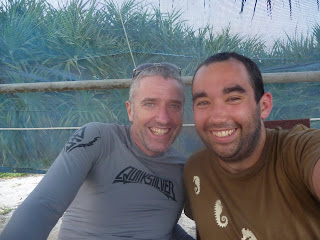 The next day my friend Hide arrived, and we met up with them around lunchtime to say hello. They gave us a lift to the local supermarket, Big 2, where all manner of supplies could be purchased. Sitting in the airconditioning and enjoying some Japanese food and an ice cream (hoo hoo yeah) were a blessed release from the weather outside. We met up with them again that evening at the local Amami festival, where we saw the last of some stage performances, enjoyed some typical Japanese festival food (yakisoba, barbecued corn, fried squid and takoyaki - octopus dumplings), drank some cold nama (draft) beer and soaked up the vibe. 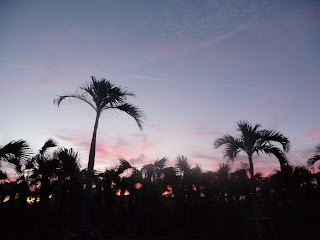 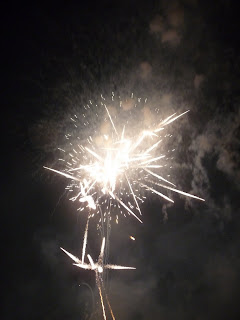 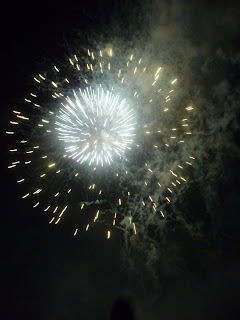 We were in a good position to see the fireworks, and let me just say, the Japanese really know how to put on a fireworks show. This was only a small island festival and the fireworks went for about 15-20 minutes, with several buildups and crescendos eventually culminating in an amazing end. We were far closer to them than you would ever be allowed in Australia (the lack of any sort of OH&S in Japan is in stark contrast to Australia's strictness), with debris occasionally scattering on us from above. These were certainly some of the best - if not the best - fireworks I've ever seen. From what I hear the summer festival in Tokyo has a fireworks display that goes for an entire hour!

Wow, great pics, and lovely to get an update on your adventures! Glad it was you and not me with the crab intestine soupy thing though!

Really looking foward to your visit in Oct - you must be so stoked to be coming back to play at Dragon Dreaming!

Lots of love and hugs,